The whole state of New South Wales is blooming. Because of Jacaranda. 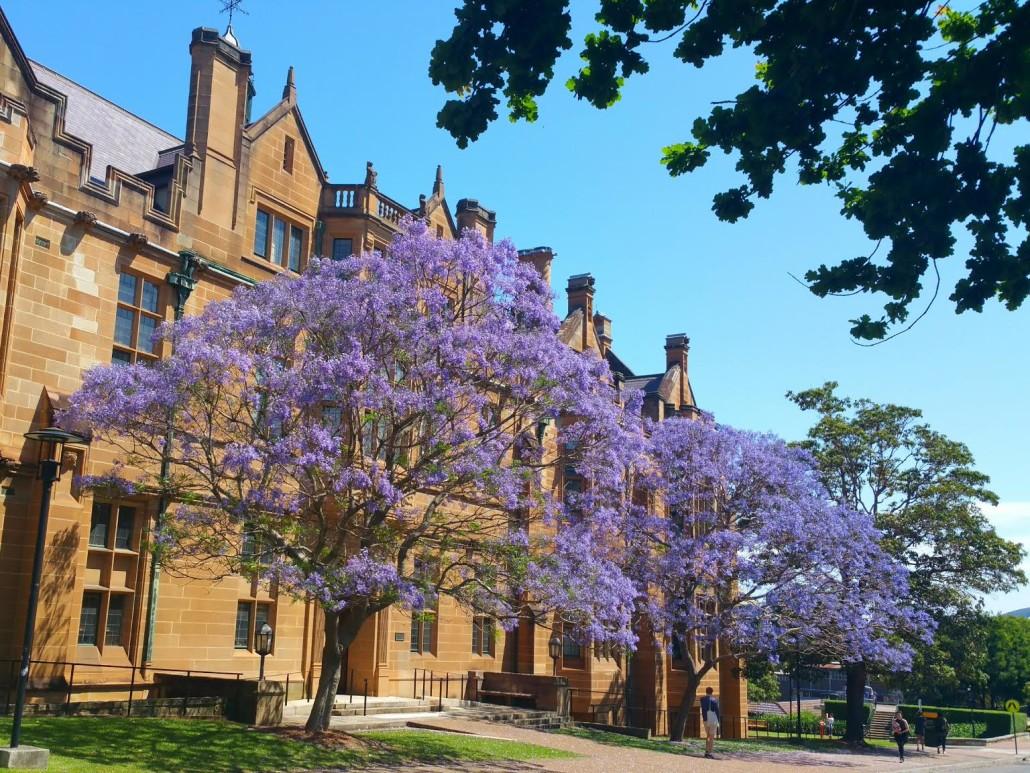 During the months of October and November, Sydney and NSW is awash with the purple bloom of jacaranda season, signalling one of the most beautiful times of the year in the state.

There’s something especially romantic about Jacaranda that I can’t fully describe. But in an attempt to fall back in love with Sydney, I decided to go and look for all the beautiful things about Sydney again. My perfect spot for Jacaranda bloom is the University of Sydney. Why Sydney University? Because it’s old and beautiful. Quality older buildings are hard to come by in Sydney due to Australia’s short history, but the University of Sydney Great Hall is truly breath taking. I’ve been living in Sydney for 18 years, it was only last Saturday that I asked J to take a photo of me standing inside the University of Sydney like that. It’s kind of silly, and I felt like a tourist, not a resident of Sydney. But hey, who cares. 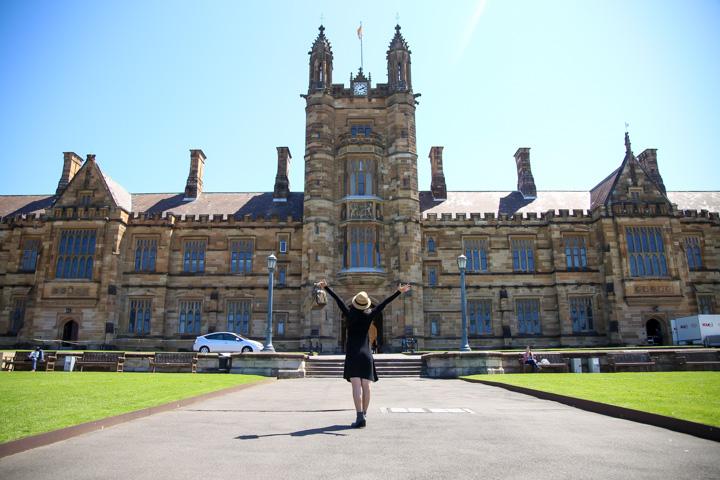 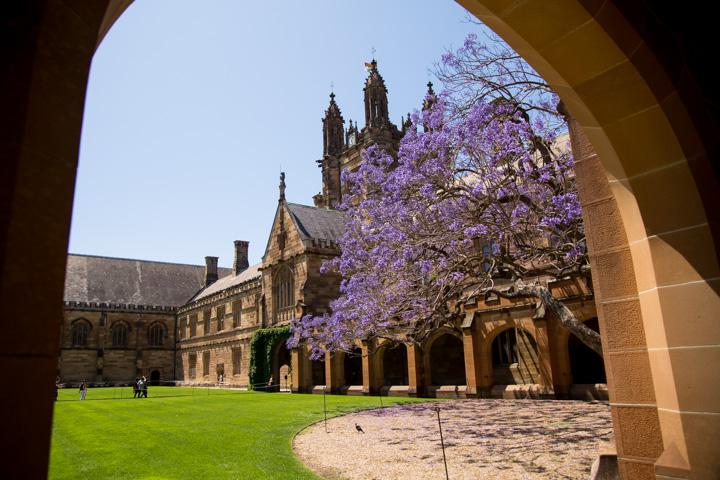 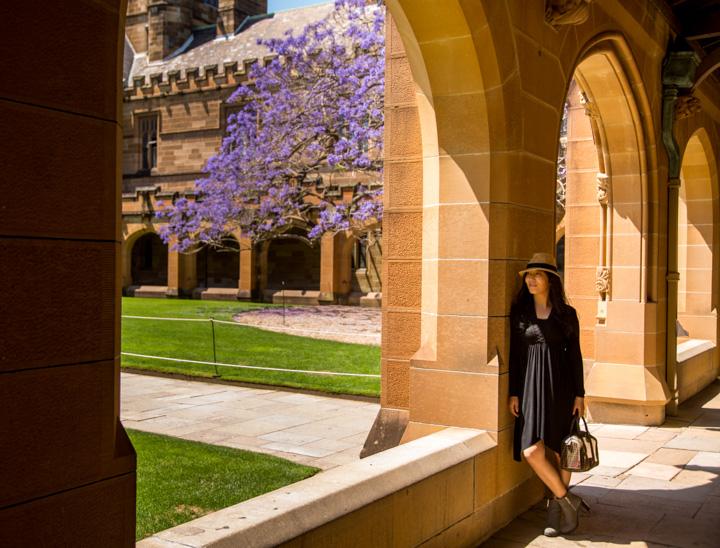 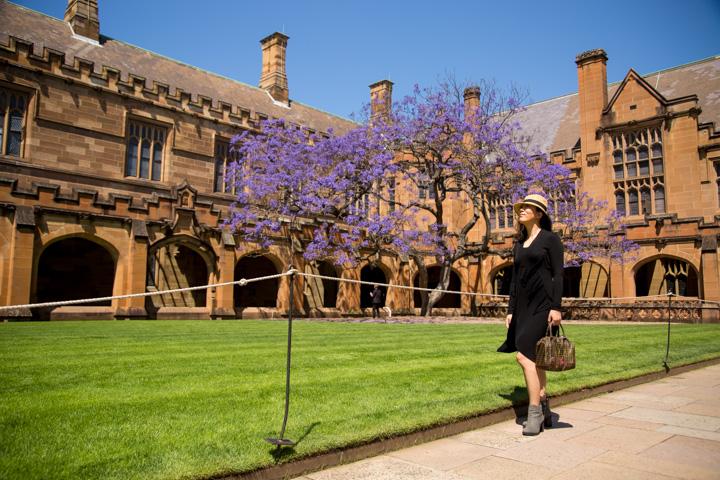 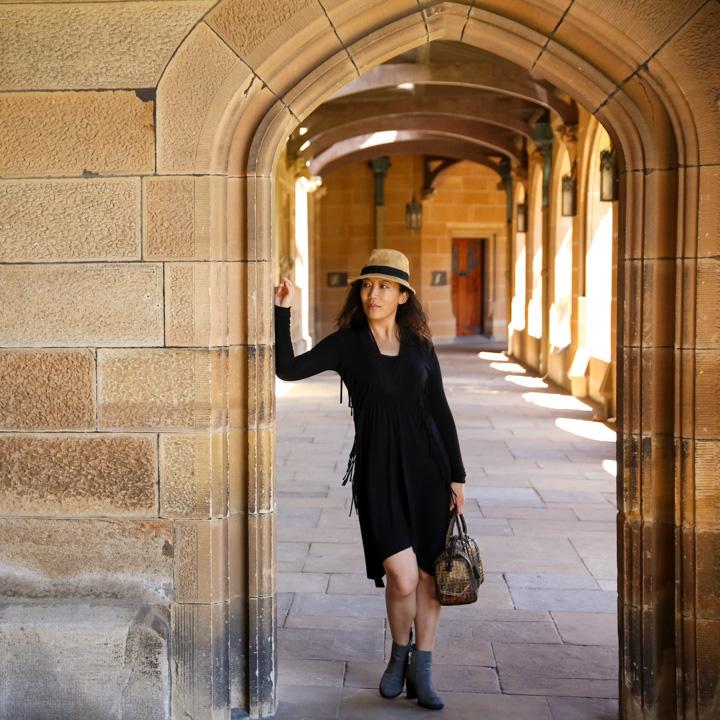 There are many other magnificent jacaranda trees in the University of Sydney, like the two in the first photo on top, next to another fabulous sandstone building inside the campus.

And this one, alongside the pond and palms trees. 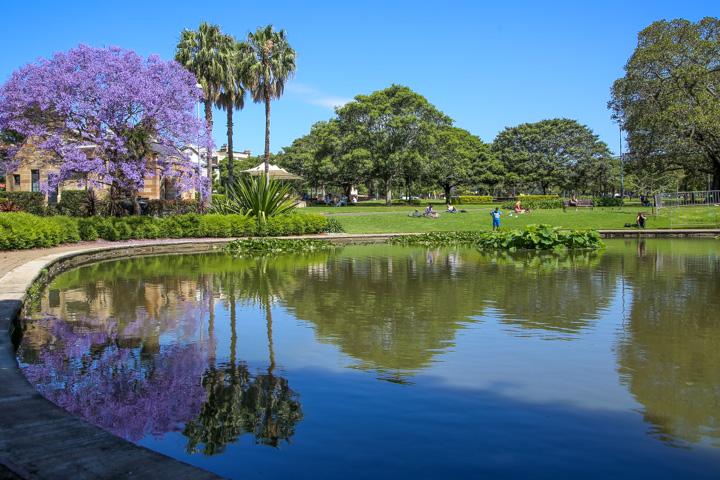 You can see blooming Jacaranda trees almost everywhere in Sydney in October; there’s one in our courtyard.

“1.       Sydney North Shore: The North Shore suburbs of kirribili, Lavender Bay, Greenwich, Waverton, Hunters Hill, Woolwich, Longueville and Wollstonecraft all display a beautiful selection of jacaranda trees during the season. Make a day of it and pack a picnic to enjoy a feast under the trees

3.       Sydney City: Starting at the Royal Botanic Gardens, a jacaranda walking tour through Circular Quay and The Rocks is a great way to see the trees, while taking in the iconic Sydney Harbour Bridge, Sydney Opera House, harbour views and historic cobblestone streets of The Rocks.

4.       Inner Sydney:  The giant jacaranda tree at the University of Sydney is so iconic that growers at the University have cloned it to ensure it lives on.  This tree is one of Sydney’s most famous jacarandas and well worth a visit during the season.  Neighbouring suburbs of Glebe and Erskineville are also worth exploring for blue hue.

5.       Grafton: Located alongside the majestic Clarence River on NSW’s North Coast, the historic town of Grafton is home to the Jacaranda Festival, taking place from 31 October to 7 November 2015. Famous for its 6,500 jacaranda trees, the Festival is one of Australia’s longest running flower festivals and celebrates the town’s magnificent lilac-blossomed trees. Festival events include the coronation of a jacaranda queen, a street parade with themed floats, markets, live performances and fireworks.”

In Love With This Crazy Shadow

How to Revitalize Your Skin With Quick Results

The Miracle Drinks That Help You Lose Weight
Scroll to top