Tag Archive for: Sanctuary of Truth

You are here: Home1 / Sanctuary of Truth

Sanctuary of Truth, hands down is the most majestic structure that Pattaya has to offer.  Pattaya indeed surprised me, not totally in a pleasant way mainly due to my own ignorance. Why on earth didn’t I know earlier that Pattaya’s biggest attraction is actually the vast number of prostitutes and lady boys on the streets? Seeing tours to Pattaya are considerably popular and its beach position in close proximity to Bangkok, I planned a self exploring trip to Pattaya in Thailand. On top of my list of places to visit, is the Sanctuary of Truth, which is truly a stunning site and fairly easy to get to from Pattaya city centre. 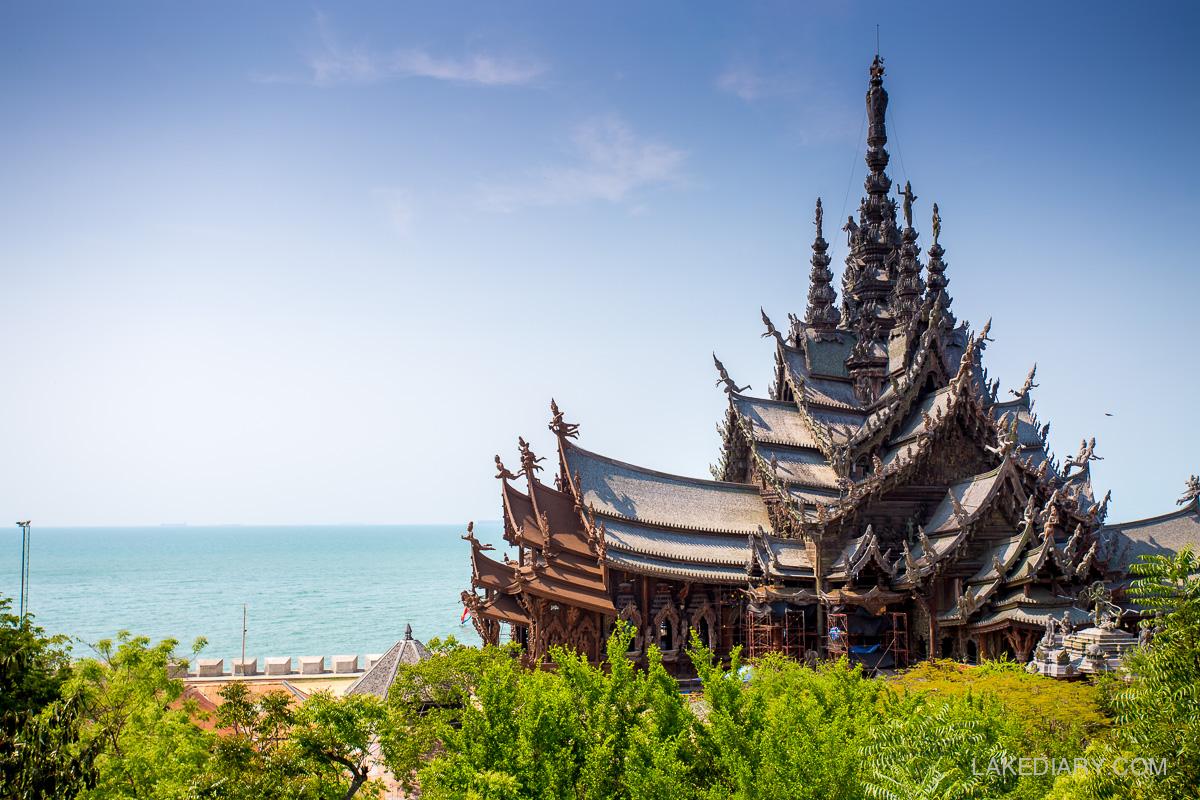 12 amazing facts about Sanctuary of Truth:

1.It might give you the impression on the picture that it’s an ancient temple but in fact it’s quite new and still a work-in-progress. Building work started to begin in 1981 and isn’t expected to be finished until 2025. You can see many unfinished pieces and plain wood poles waiting to be turned into something magical. 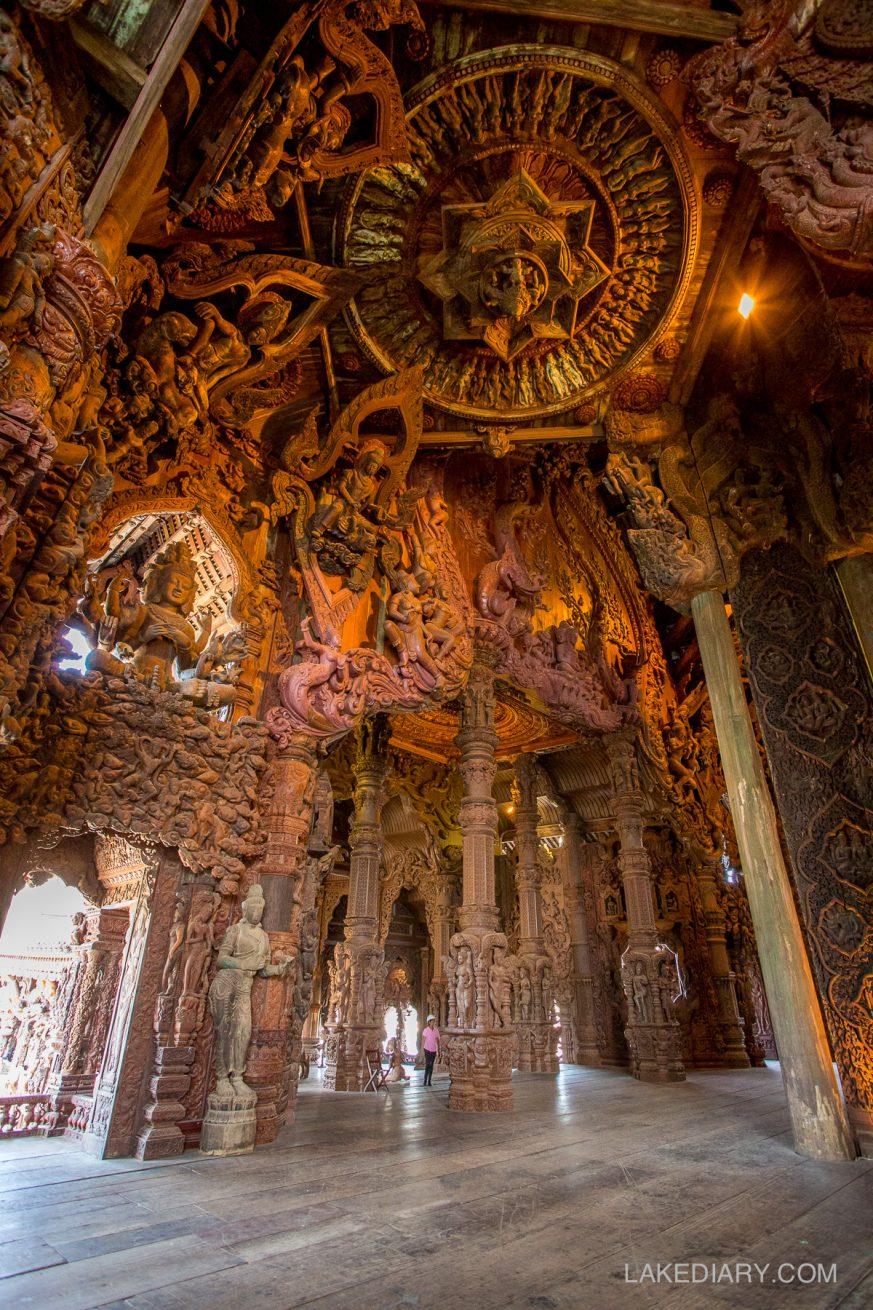 2. The massive structure is entirely made of wood without any metal nails. Looking at this architectural masterpiece, I can’t imagine how it could be done but somehow Thai people made it all possible. Those amazing, elaborate carving is totally created by hand using just hammer and chisel. 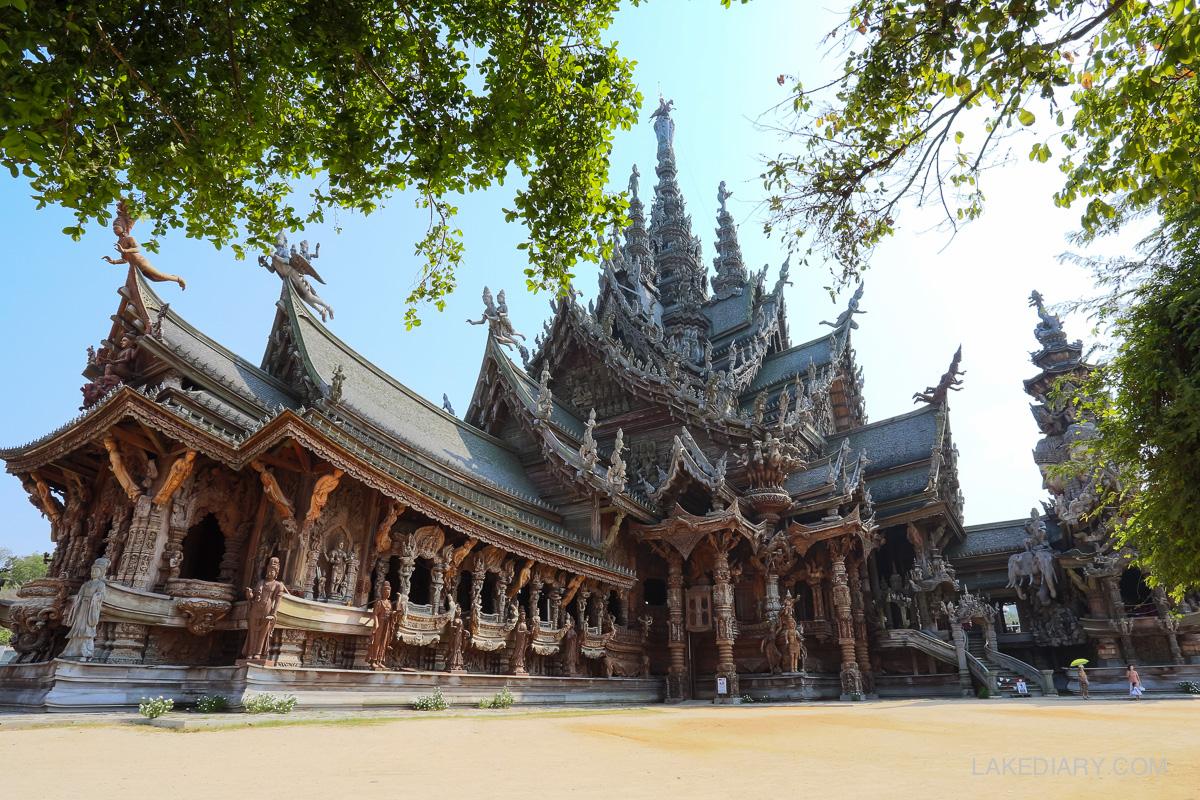 3. There’s a dress code inside Sanctuary of Truth so shorts, short skirts, tank tops and dresses above the knees are not allowed inside. Clothes to cover you up are available for rent ( 200 Bart deposit, refundable upon return). Just as you thought it’d be a place where you need to dress appropriately and show respect, they’ll hand you a helmet to wear because it’s still under construction.

Behind those gigantic toes, it was me wearing a helmet and a backpack.

4. Due to the deterioration from hot weather, sea air and termites, the woodwork is always under repairs and protective treatment. As a result, the wood colour tones of Sanctuary of Truth range from light honey to dark brown.

5. Most of the Buddha sculptures in Sanctuary of truth are extremely sexy, possessing enviably proportioned bodies and elegant poses.

High five? 🙋These buddhas pose much better than I do & are way sexier😅 #thailand #temples #travel #amazing #buddha

6. The highest point of Sanctuary of Truth is about 105 Meters.

7. Open doorways and total reliance on natural light. There are open doors all around the building to allow in natural light. It could be quite dark around the centre as there’s not a single artificial light inside but it’s nice and bright near the doorways in broad daylight.

8. The design and carvings are rich in symbolism with a mix of Thai, Khmer, Indian and Chinese influences spread throughout the four wings of the building. Its Buddhism core overlays Hinduism, Taoism and Confucianism equally, a sign of perfect harmony and peace. 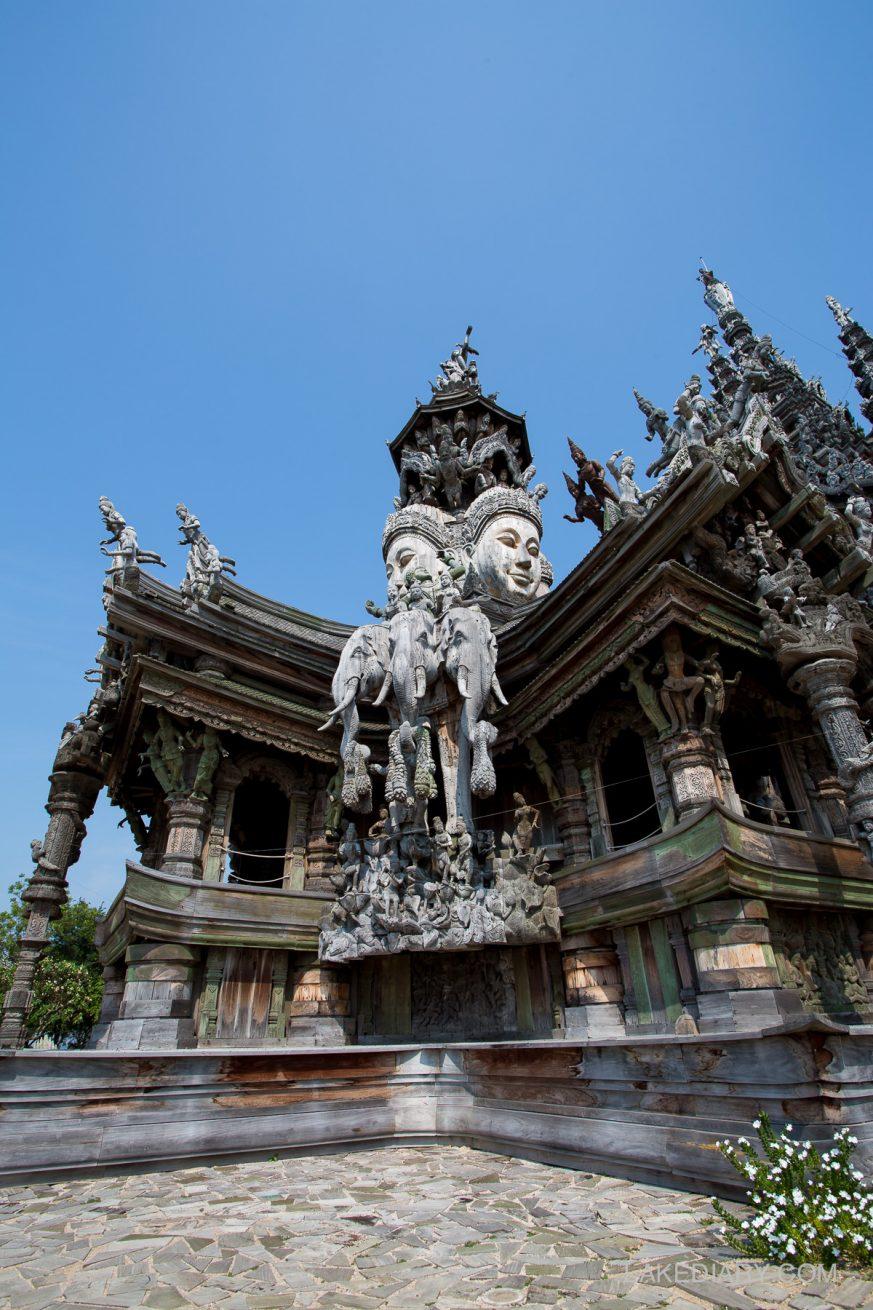 9. Sanctuary of Truth has revived and preserved ancient building techniques and architecture in danger of extinction. In this case, the building continues to support hand-hewn woodworking skills.

10. It’s about 3km from Pattaya town center. Next to the Sanctuary of Truth, stretches fine white sand and warm, turquoise water. You won’t see any swimmers or sun bakers on the beach though; expect to see the occasional speedy boats using it as a parking dock. 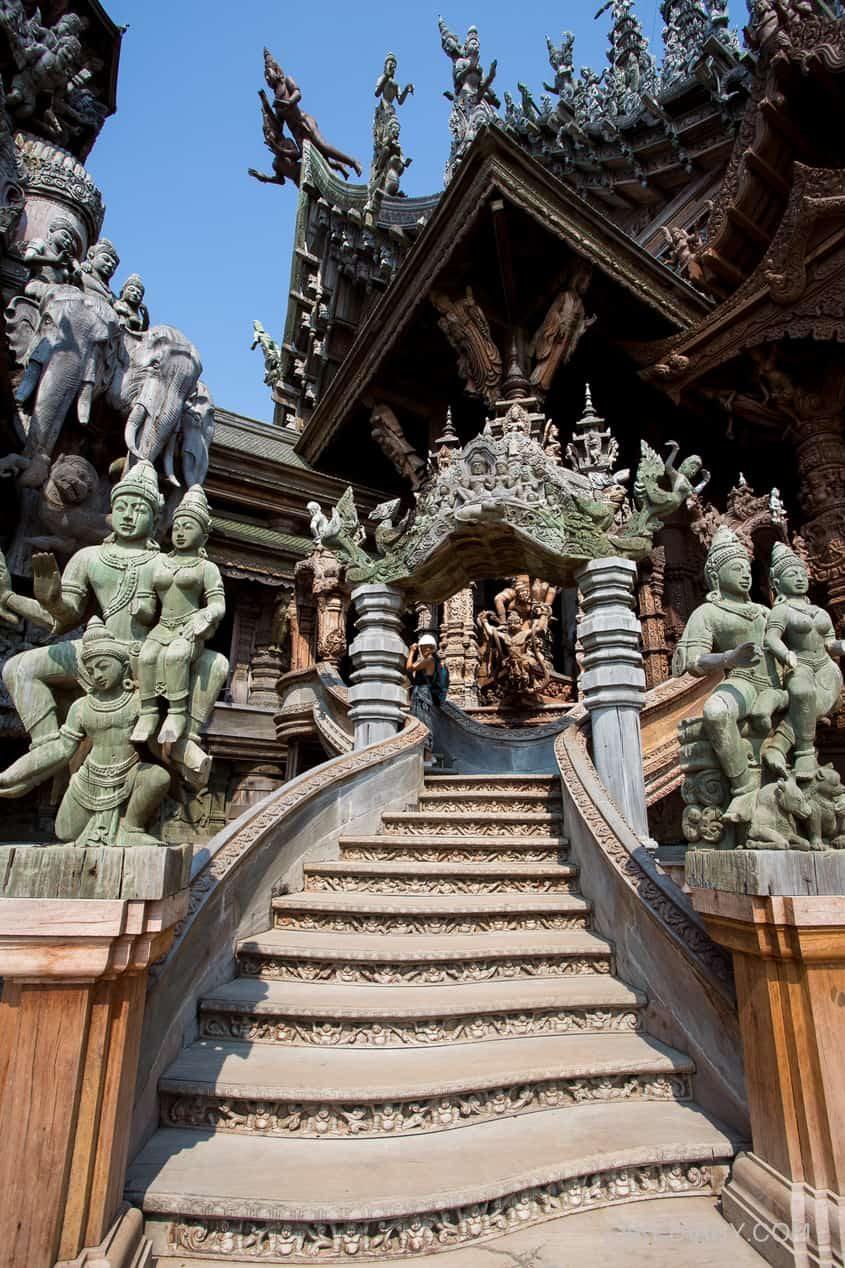 11. Building such an ornate temple-like complex was the idea of Lek Viriyaphant, a Thai millionaire whose other heritage projects including Ancient City near Bangkok.

12. It’s hard to define what exactly Sanctuary of Truth is. My first thought was that it’s a temple because of the Buddhas and the required dress code but then I was quite taken aback by the helmet.  Isn’t wearing a hat (or helmet in this case) disrespectful to Buddhas? There are also shows of Thai fighters and dancing on a covered stage at 11:30am and 3:30pm, which are nothing spectacular but rather disturbing. Some people say it’s a combination of a temple, a museum and a workshop. Whatever you define it, it’s the most significant attraction for tourists to Pattaya and a magnificent modern work of art to see with your own eyes.

Guided tours are offered in every 30 minutes ( the tour is included in the cost of the ticket price, you are not obliged to join the tour).