Tag Archive for: be an optimist

You are here: Home1 / be an optimist

I used to regard “be optimistic”& “have a positive outlook” as cliches and decided I’m much more free spirited than that. For years, I’ve allowed myself to be negative and pessimistic all the time. But life experiences have taught me that being negative and pessimistic are just pure self indulgent. It is an essential life skill to be able to maintain a positive outlook and there are so many reasons to be an optimist over a pessimist.

Before laying out the benefits of being an optimist, I couldn’t help but to look up the definition of “Optimist”:

“An optimist is a person who engages in positive thing, or “looking on the bright side” of things. Optimism is the outlook that good things will happen, even if the situation may not appear totally positive at the moment. This is the opposite of a pessimist.”

Sure, being an optimist doesn’t mean things will always turn up the way you’ve expected it to be. But optimists are stronger and handle setbacks much better. Here are 5 Reasons Why It’s Better to Be An Optimist:

An optimist tends to focus on the positive side of things in life. Optimists expect favorable outcomes and they generally feel good about themselves and the decisions they’ve made. Negative people usually concentrate on the negative side and bad events. You can tell who’s having a better time here. Do you want to be miserable — all the time?

I’m not talking about physical attraction here. Of course people tend to be attracted to pleasant looking objects initially. But if a good looking person is someone who complains all the time, he/she won’t win many friends. Understandably, who wants to hang out with a winger? Optimists are generally more outgoing & an optimist often has a positive personality. It is the positive, uplifting energy around optimists that attract people.

It’s so much easier to be negative because it’s safer. Negative people pick the bad points of everything to avoid being hurt by disappointment later. It’s a sign of weakness – believe me, I’ve been one of them. Optimists overcome problems an disappointment more easily. It’s courageous to run the risk of being

There are many unhappy people in the world but there’s hardly anyone who declares: “I want to be unhappy!” Studies show that optimists have a lower risk of depression than pessimists. Do you want to be happier? Let go of the bad things ever happened to you.

Jack Welch once said: Nothing of any importance has ever been accomplished by a pessimist. The only way to achieve more is to do more. 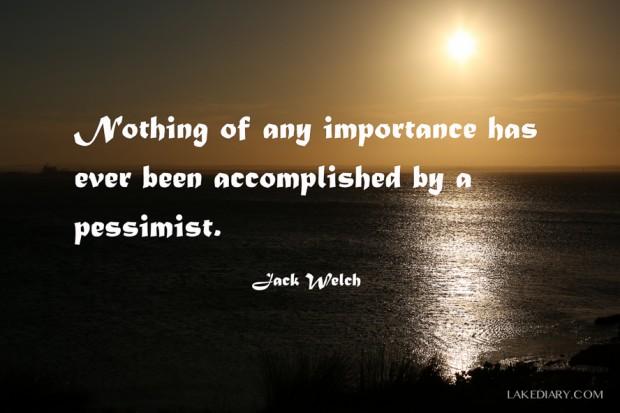 Very often, optimists are open to more possibilities. Because they expect positive outcomes, they won’t give up easily on the first sign of obstacles. They try harder. They achieve more by trying more and trying harder.

Life is never meant to be easy. But you have your choices through your journey of life. Do you want more out of your life?