Maybe there were people who enjoyed Kaldor Public Art Projects: 13 Rooms. Art is such a broad concept and it is so easy to claim to be an artist nowadays. 13 Rooms is an exhibition that brings together 13 artists to present an exhibition of ‘living sculpture’ within 13 purpose-built rooms. It was held at a stunning location: Sydney’s historic Pier 2/3 at Walsh Bay, The Rocks. The purple entrance looked interesting enough. It sounded all good except it was another story when you bring their art into context. 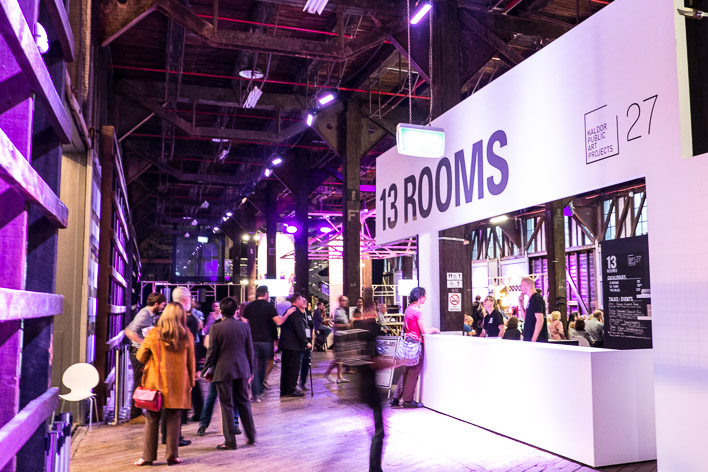 The good thing about being an artist is that you can be totally free. If viewer don’t like what you’ve presented, it’s always easier to blame the viewers.  13 Rooms exhibition was held from 11th to 23rd of April.

I went to have a look out of curiosity without any high expectation. Still, I had a feeling the exhibition was kind of lazy, depressing and overall, wasn’t that tasteful.

There were 2 performers dressed in identical outfits sitting in the first room with infinite smiles on their faces. I think the visitor between them made the “art” looked more interesting. 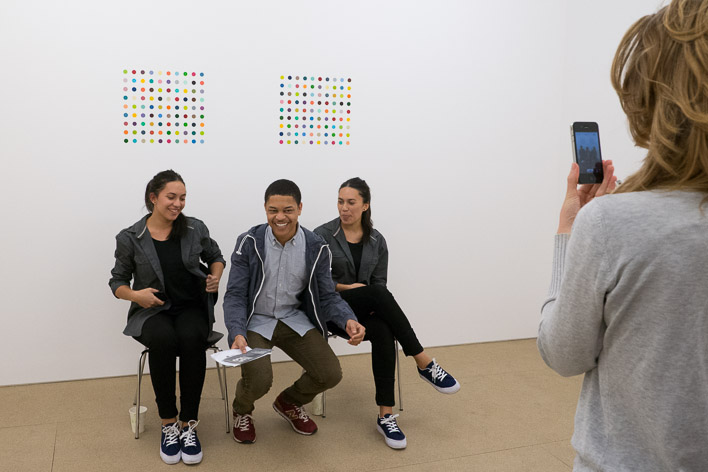 In another room, one male performer was lying in a right tube, talking to himself very loudly. I was too scared to get in the room by myself. 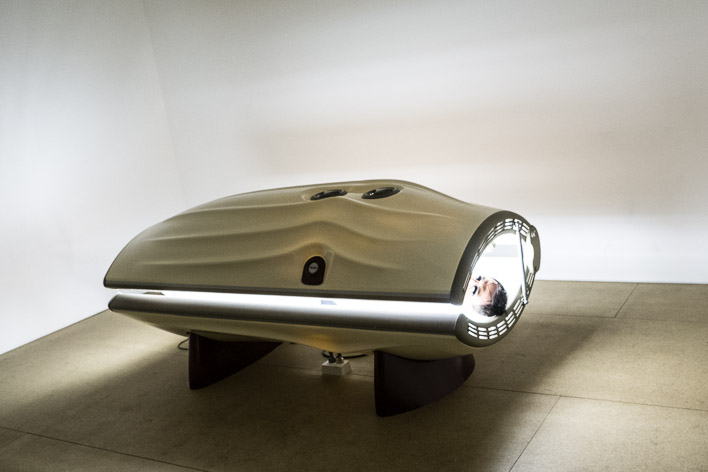 Nothing happened much in other rooms either. Someone dressed as a soldier stood still, facing one corner of the wall in one room; someone is painting in another continuously and groups of people marching or sitting in other rooms.

Nevertheless, some visitors made a cute scene outside one room. 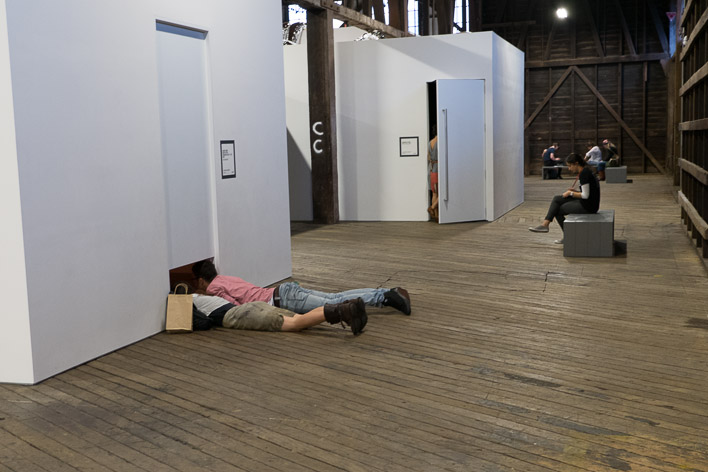 They were looking through a hole at the bottom of the door to see this: 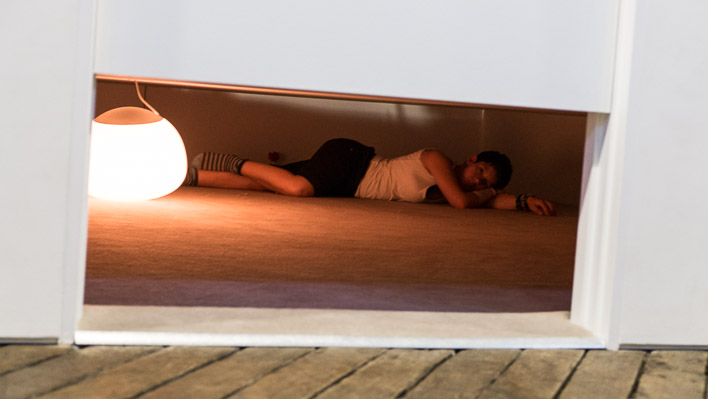 There were 2 rooms with naked performers too, photos were not allowed. I wasn’t going to anyway – there was nothing worth taking.

Sydney lord Mayor Clover Moore was in this room too watching this live sculpture. 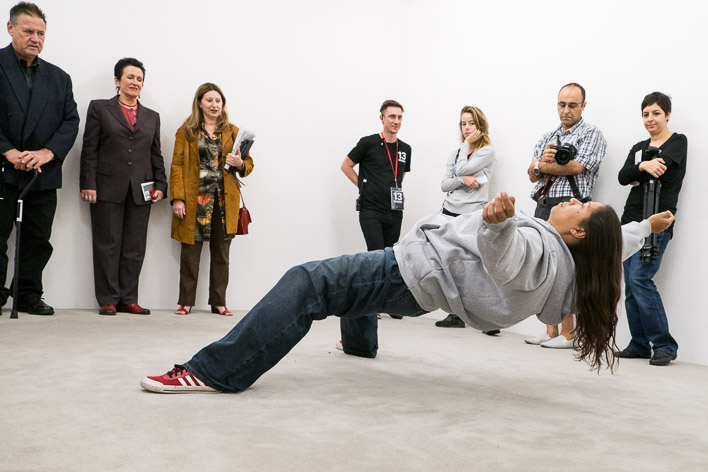 I saw something similar in London last year – some street performers were sitting with both of their feet up in the air on a major shopping street. Those London performers were all dressed in splendid, golden or silver suits with matching tall hats. The one in 13 Rooms seemed like a much easier performance with no effort on the outfit to please viewers’ eyes.

Walking out of the exhibition area, I saw some screens showing viewers’ impression of the 13 Rooms exhibition. Someone mentioned “sad” which, in my view, was quite appropriate. 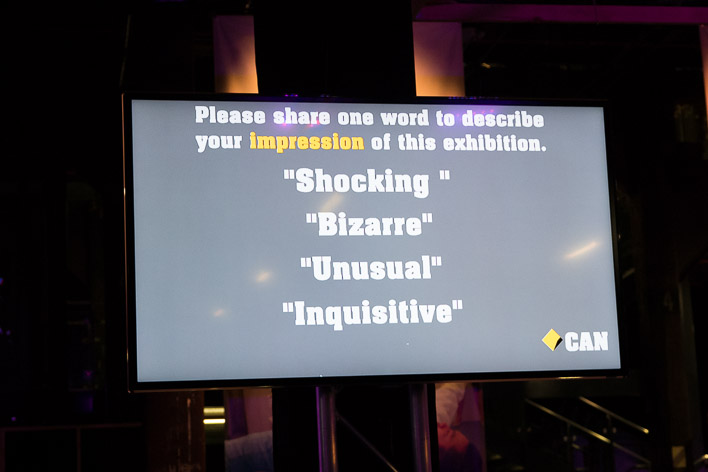 Oh well, at least the view of Sydney’s Walsh Bay never disappoints you:). 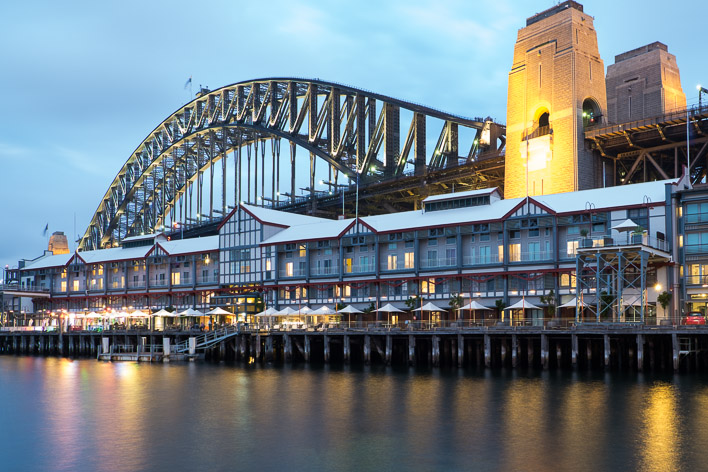 Sydney’s Walsh Bay, photo taken from out side the exhibition rooms.

Saturday – Quotes Of The Week

How To Care For Louis Vuitton Bags
Scroll to top