Kate Moss famously said ‘Nothing Tastes as Good as Skinny Feels’. I’ve never been that skinny so I am not sure how good being skinny feels. All I know is how good it feels having good food. London Borough Market is like a food heaven to me. It is a treat just to wonder around and look at the exquisite produce on offer, if you love good, fresh and sometimes exotic food from all over the world.

London’s oldest market, Borough Market could be traced back to the middle ages. It is now located on the Southward Street and Borough High Street just south of Southwark Cathedral on the southern end of London Bridge.  The day we went was a Saturday. London’s weather truly lived up to its reputation, tricky summer, that is. The day started mild and dry, then the rain came, then the thunder storm… It rained like it never rained before most of the day, which made it a perfect day out under the cover of Borough Market, eating and drinking.

Yep, it was raining:

Thought I’ve seen bread before until this one appeared: While I was busy eating J kept on shooting:

Tastiest scallops, with the orange bits on.. If you like seafood, don’t miss out on this! Just out side Borough Market, there’s this coffee shop that everybody goes to. The queue to get in was long and there was no available seat to be found inside on the weekend. The coffee was a bit too strong for my liking but obviously I was the minority there. And it was a nice surprise to see London Olympic torch…

The Olympics torch inside Monmouth 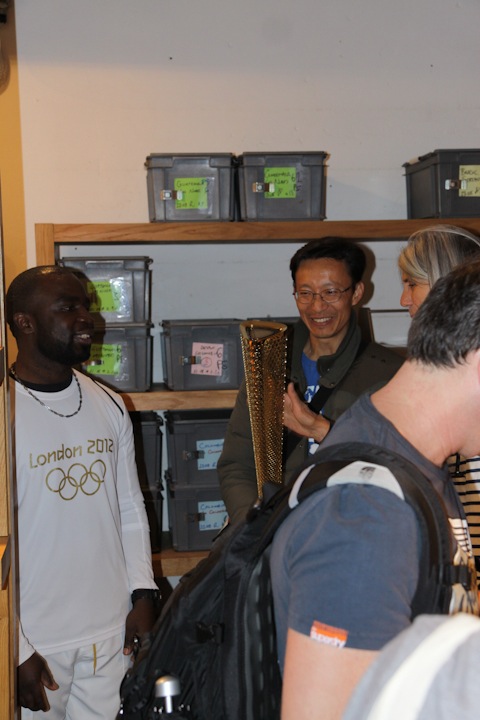 How to get there:

It is extremely easy to get to Borough market by public transport. Just get off at London Bridge whether you are taking a bus, underground or train.